A Printing Revolution: The History of Lithograph 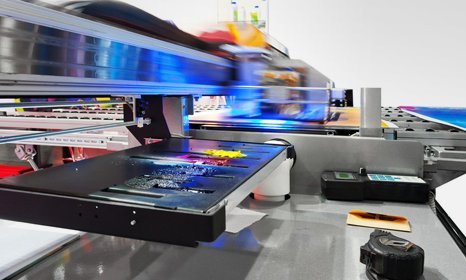 The art of printing can take on many forms. Whether as etching or engraving, the art, in some form or another has been around since at least 3500 BC. In this rich history of printing, the art of lithography stands out as an interesting case study. The process, which uses the simple understanding that grease and water do not mix, revolutionised the print industry and helped to create a host of gorgeous works of art.

However, although the process has become a staple style in the art and printing world, innovating from simple limestone print surfaces to state of the art UV offset printers, it had much more humble beginnings. With this in mind, we at Centre Colours decided to conduct some research into the illustrious history of lithography.

Before looking into its history, it’s important to understand the process itself. In layman’s terms, lithography (also known as litho printing) is the process of producing an image by laying it on a flat plate and covering the content in ink to be used for print. The image is drawn with a hydrophobic ink that will repel any moisture, and solution usually made of gum-arabic and nitric acid is spread over the surface of the image creating water-receptive areas and grease receptive areas.

The print is then kept wet so that a roller can effectively spread the oil-based ink across the plate’s surface, only sticking to the grease receptive area of the image. Paper is then placed on the surface and is press onto the sheet, creating the final product.

Alois Senefelder, a German actor and playwright living during the 18th century is responsible for the invention of lithography. Finding it increasingly difficult to print his play Mathilde von Altenstein, Senefelder found he was falling deeper and deeper into debt. He grew desperate to find a way to print his beloved play in a way that wouldn’t financially ruin him and so began experimenting with an etching technique which used greasy, acid resistant ink printed onto Solnhofen limestone. Over time, Senefelder began to realise that this idea could be modified, creating the very first lithographic and planographic print in the world.

This new technique was an excellent cost-saving strategy due to swapping out expensive copper surfaces for much cheaper limestone products and by 1796, Senefelder began publishing using lithography in a professional setting with composer Franz Gleißner.

Lithography in the 19th century

With Senefelder’s discovery, the art of lithography rapidly began to find uses in a variety of artistic and commercial cicrles due to its inexpensive and precise reproduction. Land surveying companies for example, found the technique especially useful for their work. Publishers too, found lithography to be a boon to their industries, allowing for a wider range of publications to reach a larger audience. However, with the help of Godefroy Engelmann, a Franco-German lithographer, the process began to iron out some of its more irritating problems, opening the gates for artists to use it more easily.

Near the beginning of the century, lithography was adored by romantic painters such as Eugene Delacroix, as the technique allowed for interesting shifts of tone, creating dramatic black and white scenes that lend so well to the romantic style. Delacroix’s Faust is a prime example of this.

During the second half of the 20th century, colour lithographs known as chromolithographs began to be developed. The first iterations of the chromolithograph usually produced poor results, however, with innovations made by French artist Henri de Toulouse-Lautrec, the coloured lithography reached a much higher level of consistency by the 1890s. With this, a host of artists began using the new and improved technique. Paul Gaugin an artist and friend of Vincent Van Gogh, found much success in using cloured lithography, as did the American printmaker James Mcneill Whistler, as can be seen with his famous Nocturne lithograph made in 1878.

As standard lithography was taking off in the second half of the 18th century, innovations in the process were already underway and by 1853, the method of offset lithography was patented by Englishman John Strather. Unlike standard lithography where the image is printed onto the surface, the inked image is instead printed onto a rubber cylinder which then ‘offsets’ the image onto paper or other materials. The flexibility of the rubber cylinder also allowed for it to print onto a variety of materials, from paper and cloth to wood and tin. Although the process didn’t really take off until the back end of the 18th century, it became the standard method for creating printed matter such as newspapers, magazines, maps and posters in extremely large quantities.

From then onwards, offset lithography became more and more widespread, to the point where various contemporary artists such as Kara Walker and Joeseph Beuys use the technique for their various pursuits. Modern offset printers are now able to produce high-quality and extremely precise impressions at high speeds and the process now accounts for a total of 40% of all printing, packaging and publishing. Offset lithography now produces more than twice the amount of products than the second-most used printing process.

Make your prints stand out with Centre Colours

Here at Centre Colours, we understand the importance that lithography has brought both to the commercial and artistic print industry, that’s why our pigment dispersions are second to none.

Catering for the bespoke needs of the ink, coating and paint industries, our independent dispersion house can manufacture products to fit your needs, meaning you can be sure that your products really shine.

For more information on our range of industry-leading services, visit our website, or speak to a member of our team on 01977 685458.